Married at First Sight UKTayah Victoria has given birth to her first child with husband Adam Aveling as they reveal they have named her Beau Emily.

The couple – who met on the controversial E4 show last year – shared a first photo of their baby on Instagram.

‘Introducing you all to our precious girl, Beau Emily Aveling, we are absolutely smitten, she is perfect in every way. 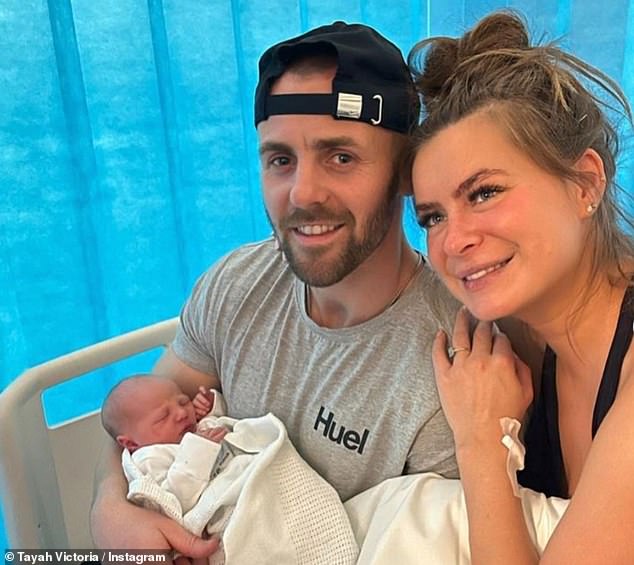 First photo: Married At First Sight UK’s Tayah and Adam took to Instagram on Tuesday to reveal they have welcomed a baby daughter called Beau Emily 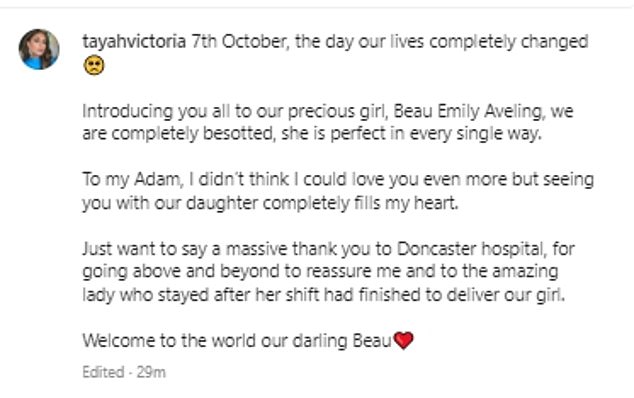 ‘I didn’t think I could love you even more’: Tayah captioned these sweet words to Adam alongside first photo of her baby

“To my Adam, I didn’t think I could love you any more, but seeing you with our daughter completely fills my heart.

“Just want to say a big thank you to Doncaster hospital for going above and beyond to put me at ease and to the amazing lady who stayed after her shift finished delivering our girl.”

The couple had announced they were expecting a girl back in April, with an adorable gender reveal video.

She wrote: ‘We’re having a…’, and set to Tyler Shaw’s Love You Still, the video showed Adam releasing the gender reveal cannon to scatter a shower of pink confetti. 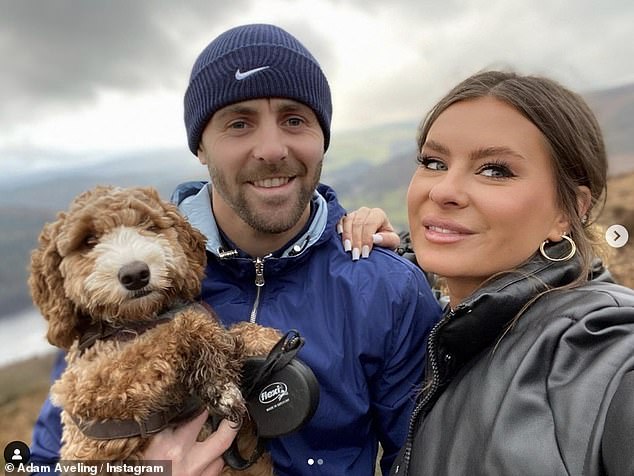 Not all plain sailing: Tayah and Adam were forced to flee their home after a field fire spread to their neighbors’ backyard back in July

The aftermath saw ecstatic mum-to-be Tayah, 25, jumping for joy as she held their beloved pooch River.

As River was soon placed on the ground, Tayah jumped into her husband’s arms as they reveled in the unforgettable moment.

Snapshots at the end of the video captured candid moments throughout the reveal, which left loved ones and fans leaving comments such as: ‘I love this reaction. #BestOneIveSeenYet. Congratulations [sic]’.

When they first revealed the news, they shared OKAY! magazine: ‘We are so excited. And the thing is, we didn’t even try! It just happened. I can not believe it. Apparently we’re just very fertile.’

Adam added: “We both said we wanted to be young parents so we’re so happy it’s happened.” 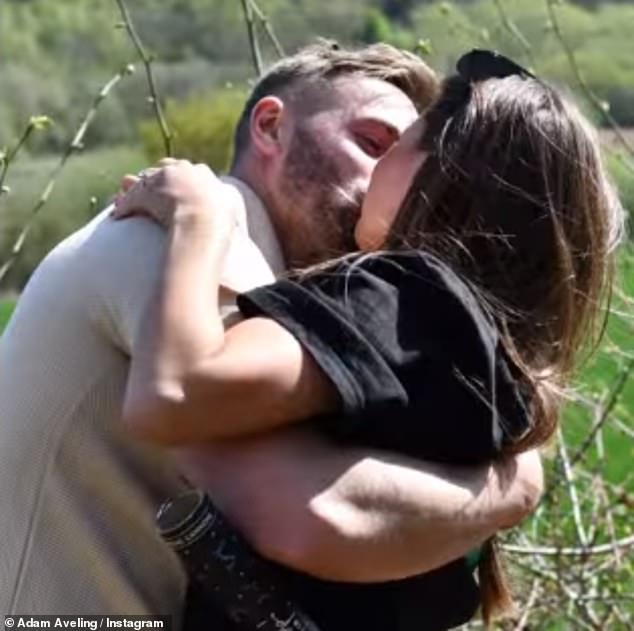 Yay! The couple announced they were having a baby girl in an adorable gender reveal back in April

The couple said they were happy to see the positive pregnancy test and are thrilled to be pregnant at the same time as Adam’s cousin.

Back in July, Tayah and Adam, 26, were forced to flee their home after a fire broke out in the field and spread to their neighbours’ backyard.

The couple urged people to stay safe after being evacuated from their homes.

Terrible fires swept through homes last night as Britain recorded the hottest day in its history, breaking the 40C (104F) barrier for the first time.

The married stars took to their social media to document the ‘terrifying’ ordeal.

On his Instagram stories, Adam shared a video of his garden with plumes of smoke billowing in the sky.

Captioning the terrifying sight, he wrote: ‘Fire on fire at the back of my house. Wow it’s hot.’

He then explained that the police had evacuated them and other nearby residents as a precaution.

He shared a picture of the scenes from the street showing the poor visibility on the roads due to the huge amount of smoke.

Later, Adam updated his fans, telling them the fire is ‘mostly out’ before showing the damage to a neighbour’s garden, which was blackened and destroyed.

He wrote: ‘Fortunately stopped just before my shed. Some neighbors were not so lucky.’

Tayah also took to her own Instagram to share videos of the fire, writing: ‘Please everyone, we have a reported fire right by our house at the moment.’

She then shared Adam’s update, adding: “Just a bit of a scary afternoon, stay safe people”.

The news that the couple is expecting a baby came on April 18.

The couple, who met and tied the knot on Married at First Sight last year, are ecstatic to have their first child. 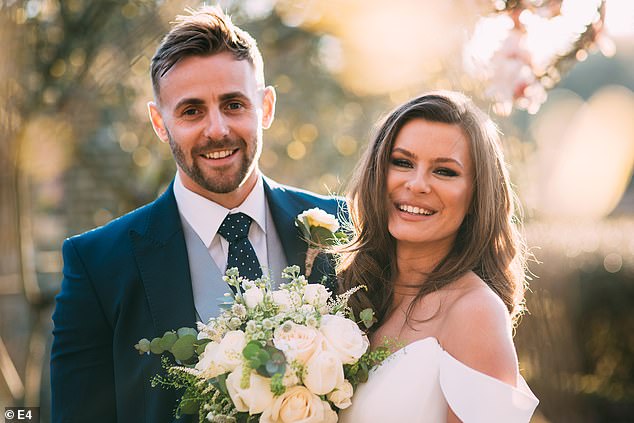 Love at first sight: They told OK! magazine earlier this year ‘We are so excited. And the thing is, we didn’t even try! It just happened. I can not believe it. We’re obviously just very fertile’ (pictured on Married at First Sight in 2021)

They told OKAY! magazine: ‘We are so excited. And the thing is, we didn’t even try! It just happened. I can not believe it. Apparently we’re just very fertile.’

Adam added: “We both said we wanted to be young parents so we’re so happy it’s happened.”

The couple said they were happy to see the positive pregnancy test and are thrilled to be pregnant at the same time as Adam’s cousin.

Adam and Tayah committed to each other on Married at First Sight last year, but not legally after he got down on one knee.

He said he wanted to profess his ‘undying’ love despite warnings from the other couples on the show that they were moving too fast.

When she asked Tayah to be his wife at the time, she yelled: ‘Are you serious?’ before you say ‘you know I will’.

The couple are now planning a special day to make their partnership official, although they have pushed back the date.

Adam said: ‘We’ve pushed it back to next year. We were supposed to get married on the date that both our parents got married, so we wanted to keep that tradition going, but now the baby is due, so that can’t happen.

‘Otherwise, Tayah would probably go into labor and walk down the aisle and be in the hospital in a wedding dress!’ 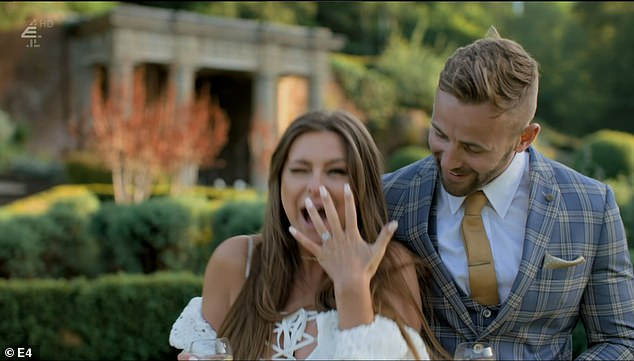 Speaking out: The couple, who met and tied the knot on Married at First Sight last year, are ecstatic to have their first child (pictured in 2021)