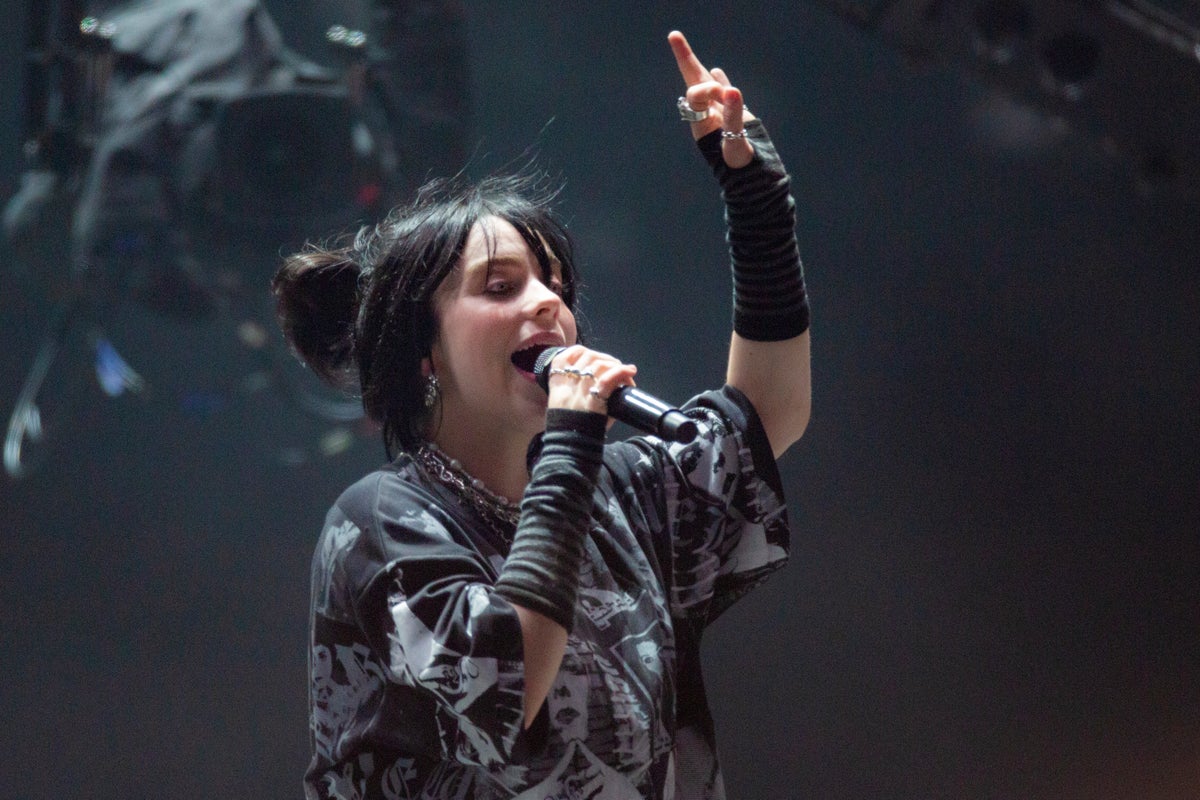 Illie Eilish said it was “a really dark day for women in the United States” during her Glastonbury headline that made history after the Supreme Court ended the country’s constitutional right to abortion.

The 20-year-old’s comments come after a US court decided to overturn the 1973 case Roe v. Wade, which legalized abortion nationwide.

While performing on the Pyramid Stage on Friday night, she spoke out against the ruling as she performed her song Your Power, which explores people abusing their power.

Sitting next to her brother and co-writer, Finneas O’Connell, she said, “The song we’re about to do is, I think, one of my favorite songs we’ve written and it relates to the concept of power and how we should always remember how not to misuse it.”

“And today is really a really dark day for women in the States. I will only say that because I can’t bear to think about it anymore at this moment.”

This look was particularly impactful for the singer as she became the youngest solo headliner ever at Glastonbury Festival.

During the sensational ensemble, she treated audiences adoring fans with a selection of hit songs from her number one albums, including Bury A Friend, When The Party’s Over, NDA, and My Strange Addiction.

She gave a typical energetic performance, running and dancing on stage, in a graphic black and white outfit with black striped arm warmers and her hair in space buns.

The singer provided another political moment during the group where she spoke about society’s need to better protect the environment.

Before doing whatever she wanted, she said, “So I think we all know we really need to do a better job of protecting the planet we all live on.

“And I love you all and stand with you and support you and everything that makes you who you are.”

The audience seemed to reciprocate her affection as they sang, danced and chanted her name throughout the set.

Toward the end of her set she admitted that she felt “unworthy” of the opportunity as she thanked the festival and fans for hosting it.

“I am honored to be here among all of you and all the wonderful artists and the history of this festival,” she added.

Eilish concluded her historic run with a stunning performance of her hit song “Happier Than Ever”.

The singer energized the crowd as she delivered a dramatic choral line that made the audience shout her words beside her.

She amplified her energy with an explosion of fireworks across Worthy Farm in Somerset to end the first day of performances at the festival.

This marks the American pop star’s second appearance in Glastonbury after making her debut in 2019 when she performed on the other stage.

Sam Fender moved to the Pyramid Theater before Eilish to play a selection of his popular tracks, including Seventeen Going Under, Will We Talk? and Spice, in front of a crowd of enthusiastic fans waving flags and singing.

After playing Getting Started, the 28-year-old said: “Hi Glastonbury, how are we?

He also gave the audience a number of guitar solos while his accompaniment band performed.

The Pyramid Theater also hosted a host of talent on Friday, including Ziggy Marley, Robert Plant, Allison Krause, Crowded House, Rufus Wainwright and Wolf Alice — who just performed after their flight from Los Angeles was cancelled.

As performances reach theaters across the festival on Friday, Sir Paul McCartney gave the audience a surprise performance at an intimate music venue in Frome, Somerset.

The former Beatles performed at Cheese and Grain Stadium before becoming the oldest solo player when they move to Glastonbury’s main stage on Saturday, exactly a week after celebrating their 80th birthday.

Earlier on Friday, Volodymyr Zelensky appeared via a video link where he called Glastonbury “the greatest concentration of freedom” and called on the world to “spread the truth” about Russia’s invasion of Ukraine.

He concluded by saying “Ukrainian Slava,” “Glory to Ukraine,” which was met with loud cheers and applause on stage at Worthy Farm, Somerset.

Other acts performed on Friday included Sugababs on the Avalon Theater, and Falls and St. Vincent on the Other Stage, which also featured Friday performances from Kae Tempest and The Libertines.