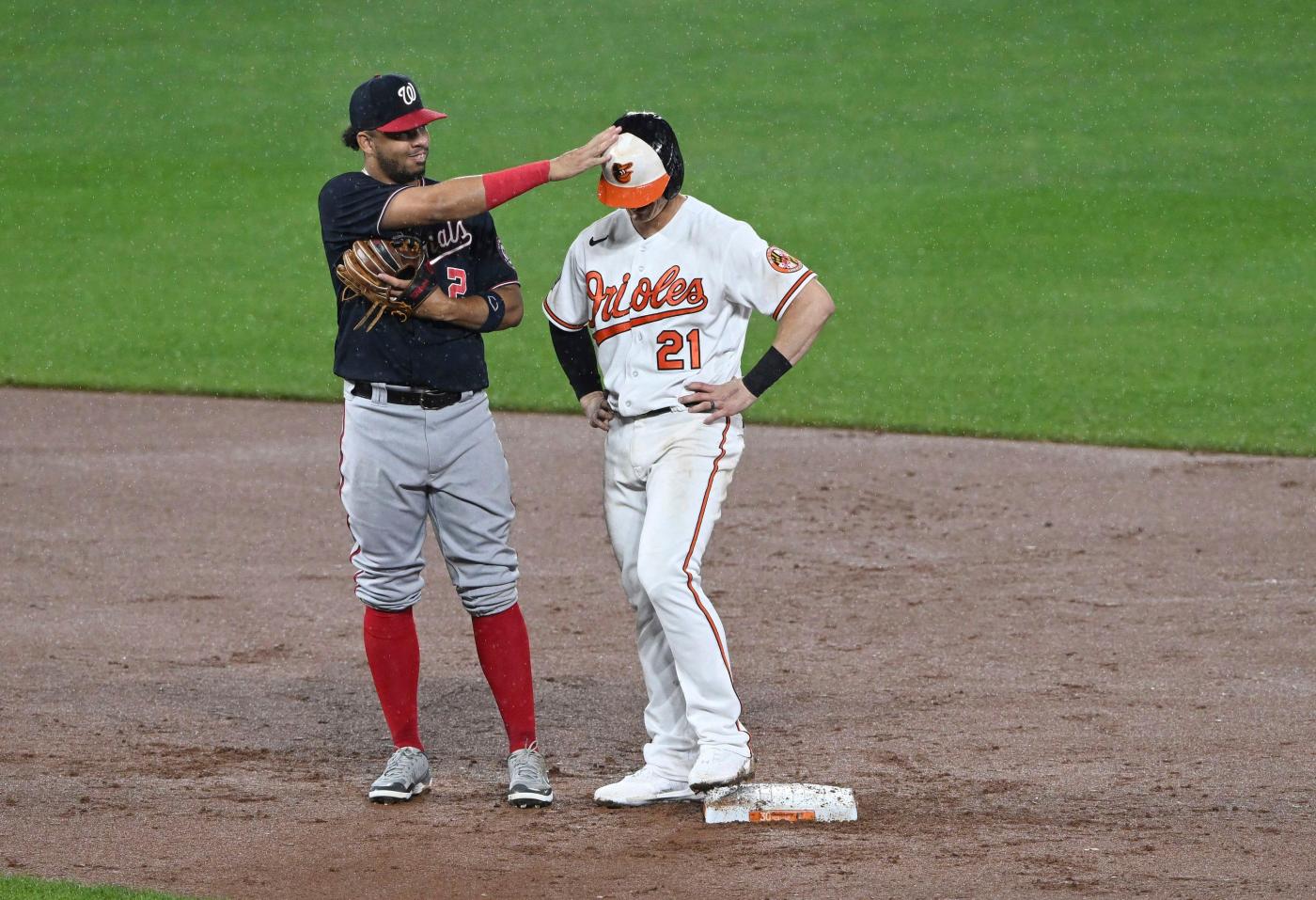 The rain intensified again when Austin Hayes hit the plate in the sixth inning, as if the sprinkler system in the sky could tell the Orioles player was on fire. Even this water-suppression system couldn’t throttle Hays, who immediately hit the last remaining item on his checklist in the left center field.

The 26-year-old broke into second base with a double, adding to his singles, treble and home career earlier in the game. For a while, the rain that kept drizzling on Hayes while he was doused with applause at Camden Yards on Wednesday night was the only thing standing in his way of making history. The 44-minute delay gave way to a water-soaked resume, but it was enough to give Hayes a fourth stroke.

Hays’ performance started innocently enough, with a single to top the first half against Patrick Corbin who plays in Washington. Things escalated from there, with three consecutive extra bases hitting a large portion of Baltimore’s offensive line en route to a 7-0 win, with inclement weather ending the competition after six runs.

During the first rain delay, Robinson Chirinos joked with Hayes, asking if he wanted the game to resume so he had his chance to play. At the time, Hayes said he cared more about the lead.

But when he walked to the board on the sixth, it was impossible for him to make sense of the enormity of the situation. He knew what a single swing could achieve, so he looked for a hanging slide that he could drive — and he got it.

“Goosebumps got me right when I was touching second base,” Hayes said. “Nothing else to do but point to the sky and thank God for this opportunity.”

Hayes became the sixth player in Orioles history (31-39) to hit a tournament in history and the first since Jonathan Villar did in 2019. He’s the first in that group – which includes legends Brooks Robinson and Cal Ripken Jr. – to achieve a tournament in the first six rounds of the the match.

Hayes also threw a runner at third base in the first inning, another notable moment for the young outside player — the kind of plays that catapulted him into the All-Star Game conversation.

“This will be shown both nationally and on ‘SportsCenter’, as we talked about tomorrow,” said Director Brandon Hyde. “I hope people get to know him and start looking at what kind of year he’s having, because he put together a great first run.”

During the rain’s second delay, right-handed Tyler Wells tweeted his support for Hayes for receiving the All-Star nod. He backed it up after throwing 95 high throws in five goalless innings, inviting Orioles fans to vote for Hays at the Midsummer Classic.

“He’s been tearing it up this year,” Wells said. “Hopefully we’ll see him in the All-Star Game. … He wants the big points. He’s constantly striving to be the best that he can be. I think everyone at this club pulls him in and hopefully Birdland is too.”

On his second run, Hayes sent Homer over the left field fence before adding a triple from the right field wall in the fourth inning. Then came the first rain delay, giving Hays plenty of time to reflect on the moment.

A weather break gave Hays another chance. And just minutes after Hayes’ completion, the rain intensified and sent Wednesday’s outing into another delay—this led to an early hit. But Hayes got that fourth hit, at least, and he didn’t miss the chance.

“He’s just an example of a player and a pro,” said Trey Mancini, who was the first player to hug Hayes after his achievement after Mancini tacked both in sixth. “He always grinds every hit, and tonight we saw what can happen when you do that. I am so proud of him.”

>> Right hand worker Matt Harvey will begin his rehab job with High-A Aberdeen on Thursday. The veteran bowler who started his run has 13 games left on his 60-game suspension for “participating in the distribution of a prohibited drug of abuse,” which appeared during Harvey’s testimony at the February trial of former Los Angeles Angels employee Eric Kay over his death. Pitcher Angels Tyler Skaggs. Closer Harvey will be eligible to return to his position with Triple-A Norfolk on July 7.

>> Player Ramon Urillas kicked off baseball activities on Wednesday, including some light swinging. “It’s the first day he’s getting him back on track,” Hyde said, after injury to Urias’ left.

>> Left-handed Bruce Zimmerman, demoted last week to Triple A Norfolk, allowed five runs on seven strokes with three walks and seven strokes in his first five runs with the tide. He came in from the bulls in the second half and allowed all five runs in this frame before settling down.

The Orioles hit the tournament