THE survivors of a 1972 plane crash over the Andes who were forced to resort to cannibalism to stay alive have said they “got used to eating human flesh”.

Sixteen survivors of Uruguayan Flight 571which took a team of amateur rugby players and their supporters to Chile, came together to mark the 50th anniversary of their ordeal – known as the Miracle in the Andes.

Their harrowing tale was described in Piers Paul Read’s bestselling book Alive: The Story of the Andes Survivors, which was adapted into the film Alive in 1993 and now Netflix working on an adaptation.

Survivor Carlos Paez said it was the survivors’ duty to travel the world and share the story of the 72 days they spent in the freezing conditions in the mountains, forced to eat the corpses of their friends.

He told Sunday Times: “I have flown six million miles on American Airlines.

“I’m doomed to tell this story forever more, like The Beatles always having to sing yesterday.’” 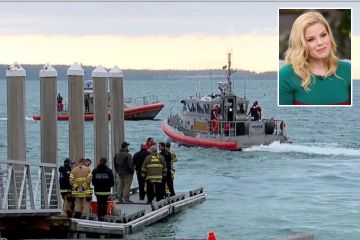 There were 45 people on board the plane, which included Montevideo’s Old Christians Club rugby team and its supporters, on 13 October 1972.

Authorities said the pilot during the flight veered off course in thick fog earlier crashing down into the Andes.

Twelve passengers were killed in the crash, and another 17 died of injuries and suffocation due to an avalanche that occurred days later.

Businessman Ramon Sabella, 70, said he was holding one of the dying passengers in his arms when she died.

After 10 days, the survivors learned from a radio on board that the search had been called off.

He remembered the agonizing choice the 16 survivors made when medial student Roberto Canessa suggested they eat the bodies of the dead in order to survive.

Sabella told the paper: “Of course the idea of ​​eating human flesh was horrible, repulsive.

“It was hard to put in the mouth. But we got used to it.”

He added: “In a way, our friends were some of the first organ donors in the world – they helped feed us and keep us alive.”

Paez said they had no other option if they wanted to live, adding that human flesh “doesn’t taste like anything, really.”

Canessa said their decision was made especially grim because the bodies belonged to their teammates and friends.

He said: “My only problem with it was that these were the bodies of my friends. I had to go to their families later to explain.”

Canessa, who used glass to cut the meat, added that he took comfort in knowing that he would be okay if the others had used his body to feed them if he had died instead.

SURVIVORS MADE A COVENANT

That sentiment was shared by the other survivors, Sabella said, who made a pact that those who lived could eat those who died from the exposure.

He said: “We promised each other that if one of us died, the others were obliged to eat their bodies.”

After spending nearly two months in the mountains, the survivors had lost hope of ever being rescued, so Canessa and Fernando Parrado set off to find help.

After stuffing their rugby socks with human flesh, the pair set off and climbed about three miles down the mountain, exhausting them as the journey took ten days.

Antonio Vizitin had originally joined them in the desperate search for help, but had been forced to return because they did not have enough food to feed three people.

During their descent, they encountered a raging river that stopped their search, but Canessa and Parrado saw Sergio Catalán, a Chilean shepherd, on the other side, who could not hear them over the water.

SHEPHERD Went to GET HELP

Fortunately, the shepherd returned the following day and threw a stone with a pen and pencil to the survivors, who explained their terrible ordeal.

The shepherd succeeded in alerting the authorities to the situation of the survivors.

A multi-day helicopter rescue was carried out and was able to save the other survivors, many of whom had lost half their body weight.

Sabella said: “They took us to the hospital in Santiago. I remember the joy of the first warm bath.”

Despite still being haunted by their harrowing ordeal, many survivors have made the most of their rescue.

Paez, now a grandfather of five, travels the world as a motivational speaker and tells his story.

Roy Harley became an engineer and is now retired, aged 70.

He is also credited with his country’s first rugby win against Chile.

Canessa is a pediatric cardiologist and won a British Council scholarship to study at London’s Guy’s Hospital.

“God has been very good to me,” he said, adding that he sees his patients have the same will to live that he experienced in the mountains.

“I tell them we are going to climb mountains and I will be your guide.”